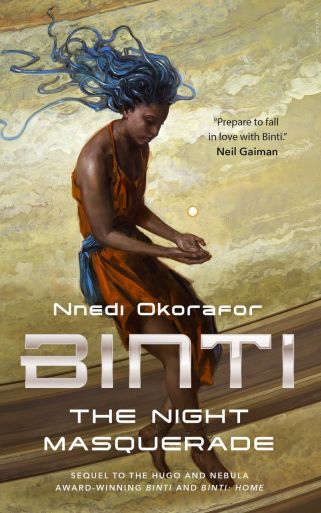 Getting to the end of the novella section for the Hugos. I am sure that you are aware that voting ends at the end of this month and may be wondering how I am intending to get it all done. Well, I am not to be blunt. I do intend to read through the Novellettes and the Short Stories though, I am currently blogging behind my reading (as I write this I am half way through the final Novella) so whilst my posts may end up being up after the Hugo voting has ended, I should have done the reading before then.

For the Novellettes I think I shall split them into two posts, review three in one post and then three in the other and one post for the short stories. I may then do a wrap-up of the Hugos and my voting as a whole and try and get all that scheduled before I run off to Dublin and WorldCon.

“Even back then I had changed things, and I didn’t even know it. When I should have reveled in this gift, instead, I’d seen myself as broken. But couldn’t you be broken and still bring change?”

In regards to this book, I will start off by saying that I have not read the first two. I did debate as to whether or not to read the ones that were parts of a series I hadn’t read but decided that since it was shorter I might as well give it a go and see how I got on.

The story follows Binti as she and her companions head back to her home to see her family and find themselves in the middle of a conflict between two people, one that will cost Binti a great deal even as she tries her best to find a way to stop it before it gets too out of hand.

It did take me a while to get to grips with the story, largely because I had clearly missed explanations of terms and such that will have come up in earlier books, leaving me quite confused in places. I will say that by the end of the story I had caught up on everything and it did make sense, but it was a little slow going at first due to my lack of context.

It’s certainly a very interesting setting, the magical mathematics reminds me a little of the Foundation series by Asimov, though the feel is very different. I do think I would have gotten a lot more from the book if I had read the others first and I do intend to go back and read them as I did still enjoy the story.

One thing that I found a little distracting was that Binti did come across as something of a Mary Sue type character in places. Now, I don’t consider this to be irredemable, people rarely complain when a male character gets to be all sorts of awesome without any real flaws so when a female character does, especially a woman of colour, in some ways it can be a good redress of balance and I think in this case I would count it in that category. Yes, Binti does have an impressive list of accomplishments and abilities (this is also the third book so I may also be missing vital character development from the earlier ones), but she does also make mistakes and is not entirely perfect.

Some more spoilery thoughts below the cut.