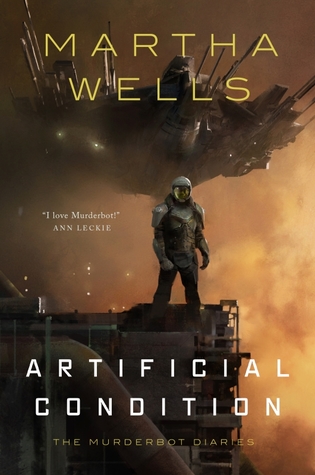 This is the last the of the Hugo Best Novella category. I have managed to get all the reading done that I had hoped so there will be future posts from me on those categories and my overall thoughts as well.

This is another one I haven’t read the earlier one in the series but I have to say that it honestly stands up very well as a stand alone and whilst it does reference some things that clearly happened in the first book, they make enough sense to be something that will be added value for fans of the series but does not ruin the enjoyment of the story.

The story follows the tale of a Murderbot, a construct which is a cyborg basically, one designed for security which means they are a very efficient killing machine. This one has broken their programming and is trying to find out more about their past and that takes them to a mining area to uncover the secrets of an area abandoned by a violent incident involving bots, on the way they get entangled in working for a group of humans who have no idea that the Murderbot is not a human security expert.

There was a lot I enjoyed about this story, not only was it excellently paced with a very compelling set of characters (especially considering that a number of them are not human), it also had an engaging plot which kept me interested right up to the end. I also liked that it was clearly a mix of ongoing plot and plot that was just for this story which meant that it had more than one layer to it but was still fine as a stand alone if you haven’t read the others.

One thing that did niggle at me a bit was that at one point the Murderbot is having an internal thought process regarding sex and their complete lack of interest in that sort of thing. Now, on one hand this does make sense for a being that was built to do what humans said and kill those they needed killing, but it does unfortunately reinforce the bad stereotype of asexuals being something other than human. I don’t think that was deliberate on the part of the author, but it was somewhat frustrating. Note that this sort of depiction of asexuality would be a lot less of an issue if it wasn’t the main sort of representation you can find.

I very much enjoy the sort of exploration of what it means to be a person that the series is engaging with and I will definitely be looking to read the rest of them and see how it all goes.