Book: Girls of Paper and Fire by Natasha Ngan 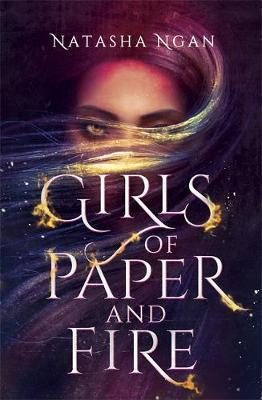 First off, apologies for the quiet. Work is pretty busy in the run up to Christmas and I have also been struggling to get into the right mindset to write these. Not sure how well I shall be doing on reviews since I am planning on doing NaNoWriMo this year, but I shall at least endeavour to update you all on my progress with that.

I have been excitedly wanting to read this book since I heard about it. Natasha came to the Super Relaxed Fantasy Club and did a reading and from that and what she said about the book I knew I needed it in my life.

To start with, there are not nearly enough genre books written by people of colour and that also tends to mean that the ones that do get published are pretty outstanding and this one is no exception.

The premise also appealed, a love story between two women is still something we also don’t see enough and I am a sucker for fictional romance in many forms.  Not just that, but the nature of the setting being in a harem and dealing with sexual assault meant that it appealed on that front as well. Let me explain that one a bit better. I am a survivor of sexual abuse and to see that sort of story reclaimed by a female writer and including a love story between two survivors, that definitely appealed in a way that male written rape narratives generally do not.

The story follows the lives of women called Paper girls, who belong to the Paper caste and have been chosen to serve in the harem of the King for a year. We mostly follow Lei, who is a late addition to the girls and did not go through the contest to be there that the rest of them did. The relationships between the Paper girls and also others in the Court is well presented and the characters come across as having real depth to them. Even the King is shown to be a complicated person and no one is drawn in straight up black and white terms.

I do want to address something that never struck me as anything of an issue, but after having a conversation with a couple of women at a book event it seems to be a problem for others so I wanted to talk about it. I mentioned before that there are castes, one of which is Paper, who are all human. One of which is the Moon caste, who are fully demon (which in this setting means anthropomorphised animals) and Steel caste, who are part demon, part human.

When I was talking to the two women in question they asked me if I had an issue with the Moon and Steel caste characters being furries, or how did I imagine it in my head since they had sex with humans. The honest answer is, I suppose I have had a good bit of exposure to the idea of animal aspected demons from various Asian cultures so to be it didn’t really seem strange or odd and I certainly never got weirdly sexual about it, though that may be more to do with the fact that I am asexual than anything else.

My advice is, suspend your disbelief, don’t think too much about it and don’t make it all weird. All of the characters in the book are thinking, feeling people, whether they are human or not. If you do that I think you will get a lot more out of the story and not get too hung up on something that I am pretty sure is a difference in cultures.

Honestly this book was fantastic and the story really got to me, both in the power of the representation, the themes of the book in regards to prejudice, society being stratified by race, dealing with sexual abuse and rape. It doesn’t pull punches without being gratuitous. I highly recommend it.