Book: The City in the Middle of the Night by Charlie Jane Anders

Right, so I have been bad at catching up with these again, this whole pandemic is not doing wonders for my mental health I will admit. I am most of the way through all the reading I have been doing for the Hugos so I have a lot of posts to catch up on!

“Part of how they make you obey is by making obedience seem peaceful, while resistance is violence. But really, either choice is about violence, one way or another.” 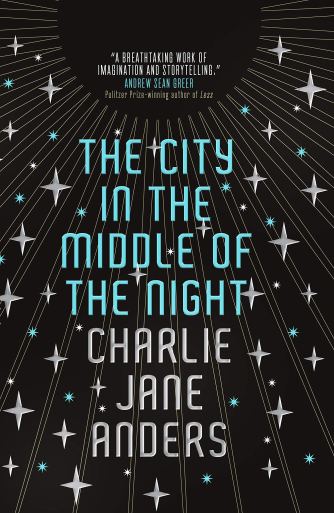 So first up (since I already did A Memory Called Empire) is The City in the Middle of the Night. This was something I had already bought for myself and hadn’t gotten around to reading yet. We also did it for my book club recently so I got to combine my reading in a really efficient way!

I will admit that I wasn’t a big fan of her first book, All the Birds in the Sky, just not quite my thing (though I know loads of people who loved it). The premise for this one really caught my eye though and listening to her talk about it on her podcast (Our Opinions Are Correct) got me really interested so I thought I would give it a go and I am honestly really glad I did because I very much enjoyed it.

The book follows two different protagonists whose lives get tangled up together in the course of the book. The world that the book is set on is one that is stuck with one half in the light of the sun and the other half in darkness, so the only habitable area is the twilight region between day and night. Sophie is a young woman from the poorer side of Xiosphant is a student and a revolutionary. She ends up exiled into the darkness and is saved from it, an event that will change the course of her life and potentially the planet. The other woman is Mouth, a traveller seeking to preserve the memory of her lost people. The two of them will get caught up in the troubles of the world and will have to find a way to work together to get through it.

“You might mistake understanding for forgiveness, but if you did, then the unforgiven wrong would catch you off guard, like a cramp, just as you reached for generosity.”

As I mentioned before the setting of this book really got my attention, the idea of a civilisation perched in twilight, caught forever between a day and a night that would kill them was something I find fascinating, especially in regards to what a society would look like in those sorts of conditions. There’s an interesting contrast between Xiosphant, a city that is built on order, on using shutters to make a fake day and night to give the residents the sense of routine that they had on Earth, whilst the other city is relaxed, more chaotic as the residents have much more freedom to do what they want.

One of the main focuses of the book is also on the relationships between the characters, which is always a favourite thing for me. Though a warning, there is a very toxic relationship portrayed in it that could be pretty triggering if you have been through something like that. It is very, very well done and I often found myself screaming at the character in the book, not because I blamed them for their choices, but because I desperately wanted better for them and it was painful to watch them go through it all. Which I mean, is excellent characterisation, the whole thing wouldn’t have upset me as much had I not cared about the characters and if the depiction hadn’t been quite so realistic, so masterfully done on the author’s part.

The ending is a little open in some ways, I don’t want to get into detail because I don’t want to spoiler it for anyone. I think overall I liked the way it ended, it wrapped up enough of the story to feel like some sort of ending, whilst still leaving other things to your imagination, in a way I really did like. The book tells the story it wants to tell and I got really invested in it, it’s not my favourite out of the Hugo novel finalists, but it definitely deserves it’s place there. Well worth a read.